2016 Kigali amendment on hydrofluorocarbons could reduce warming by a small but crucial 0.5C 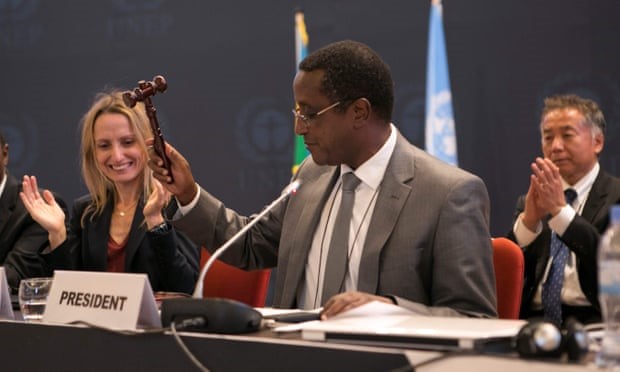 From the beginning of next year, a new global pact will take effect that could have a profound impact on climate change, cutting harmful greenhouse gas emissions by amounts that could help stave off some of the worst impacts predicted by the IPCC.

This little-noticed treaty has nothing to do with the Paris accord, the United Nations Framework Convention on Climate Change (UNFCCC) negotiations that have dragged on since 1992, or energy sector emissions, which have resumed their rise.

The Kigali amendment, which was agreed on 15 October 2016 and comes into force on 1 January, will drastically reduce hydrofluorocarbons (HFCs). These heat-trapping gases are the byproduct of industrial processes such as refrigeration and can be eliminated from those processes by re-engineering. The amendment comes under the Montreal Protocol, the world’s most successful international environmental treaty, which aims to stop the depletion of the ozone layer.

HFCs are prime examples of short-lived climate pollutants (SLCPs), a range of chemicals that are spewed into the atmosphere by human activities and contribute to global warming. While attempts to reduce climate change have rightly focused on the main greenhouse gas, carbon dioxide, mostly produced from our use of fossil fuels, these other substances have been largely ignored.

Experts estimate that cutting down on SLCPs could reduce global warming by as much as 0.5C. That would not be enough to avoid the worst effects of climate change if we continue to burn fossil fuels, but it could buy humanity some much-needed time while carbon emissions are brought under better control.

“The only way to slow near-term feedbacks [which could drive climate change past tipping points] in the 15- to 20-year window before we lose control to runaway warming is to cut the SLCPs, which can provide considerably more avoided warming at mid-century than cuts to carbon dioxide can provide,” said Durwood Zaelke, founder of the Institute for Governance and Sustainable Development and a reviewer of the IPCC report on the effects of 1.5C warming. “In fact, [they could provide] two to six times more [than carbon cuts].”

He said the IPCC had recognised their importance. “This is the IPCC’s first acknowledgement that cutting the super pollutants – black carbon, methane, HFCs – is essential for keeping the climate safe. These cuts are the fastest way to slow down warming while we decarbonise the energy system and learn how to remove carbon from the atmosphere at the scale we need.”

Many SLCPs break down relatively quickly in the atmosphere, unlike carbon dioxide, which can stick around for a century. But while they are present, they can have a greater impact: some HFCs have a global warming potential more than 11,000 times greater than that of carbon dioxide.

The Kigali amendment, by avoiding the equivalent of up to 90bn tonnes of CO2 by 2050, could be “perhaps the single most significant contribution to keeping warming well below 2C, aiming for the still safer 1.5C,” Zaelke told the Guardian. 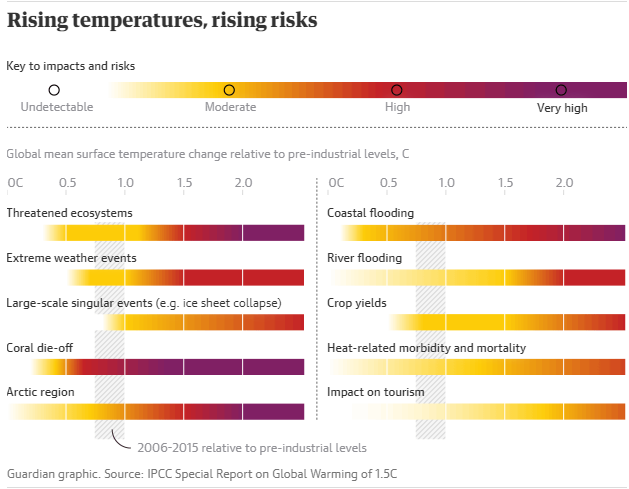 A recent report, before the IPCC publication, by Oxfam and the World Resources Institute found that reducing SLCPs warranted a much greater focus than it has received in climate change efforts. “In the near term, taking fast, ambitious action to reduce SLCPs is particularly vital to keeping temperature rise below 1.5C,” the authors said. “As with present-day impacts of climate change, the impacts associated with crossing such thresholds in the future will impact poor and vulnerable communities first and worst.”

Another SLCP is methane, produced when vegetation rots and from animals, and in the form of natural gas from fossil fuel exploration. Methane is more than 20 times as powerful as carbon dioxide as a greenhouse gas, but few attempts are made to stop it reaching the atmosphere, even from easily containable sources such as sewage plants and intensive livestock farms, and from industrial sources such as fracking wells and oil and gas production.

Soot, or black carbon, is another byproduct of burning fossil fuels, and its effects can clearly be seen at the poles, particularly the Arctic. Brown, black and grey stains over the pristine wildernesses of Greenland, Siberia and Alaska come not from natural sources but from the fall of soot from the air, carried thousands of miles from fossil fuel burning. The stains contribute to warming, because the darkened snow absorbs more heat instead of reflecting it.

Soot from power station chimneys and vehicle tailpipes can be captured at source or reduced by switching to burning cleaner fuels. But getting rid of soot helps combat not just warming but also air pollution, as the particles are one of the leading causes of ill-health from environmental factors.

Cutting down on soot is not straightforward, however. The contribution of aerosols such as soot and other small particles to warming is complex: while soot on Earth blackens snow and other surfaces and increases warming, aerosols high in the atmosphere deflect some of the sun’s rays back into space. This dimming effect could have already saved the world from as much as 0.5C warming that might have been expected from the quantities of carbon now in the air, according to Johan Rockström, chief scientist at Conservation International.

Removing soot or stopping its release into the air might end up being of less use to the climate than stopping other SLCPs as a result, but it would save lives blighted by air pollution.

Zaelke said: “With the wolf of climate impacts at our door, time for our counter-offensive is short. The 30 years of success of the Montreal Protocol should inspire us to take still stronger actions, and to use additional tailor-made agreements to address specific business sector emissions, with the full engagement of industry.”

*Matéria originalmente publicada no The Guardian

Para saber mais sobre nossa Política de Privacidade
Necessary Always Enabled
Necessary cookies are absolutely essential for the website to function properly. These cookies ensure basic functionalities and security features of the website, anonymously.
Functional
Functional cookies help to perform certain functionalities like sharing the content of the website on social media platforms, collect feedbacks, and other third-party features.
Performance
Performance cookies are used to understand and analyze the key performance indexes of the website which helps in delivering a better user experience for the visitors.
Analytics
Analytical cookies are used to understand how visitors interact with the website. These cookies help provide information on metrics the number of visitors, bounce rate, traffic source, etc.
Advertisement
Advertisement cookies are used to provide visitors with relevant ads and marketing campaigns. These cookies track visitors across websites and collect information to provide customized ads.
Others
Other uncategorized cookies are those that are being analyzed and have not been classified into a category as yet.
SAVE & ACCEPT